If reading is not your style, skip to the end of the post for a short summary of my experiences with clearasil and proactive.

Cons: Ineffective – You get what you pay for.

First off, let me state that most people assume/hope that a simple wash will cure all of your acne problems. Not only is that merely a dream, it’s a pretty far fetched idea. That’s what makes products like this sell. It’s very misleading, it won’t cure your acne or make it disappear in 12 hours, like it suggests. Shame on Clearasil for false advertising. Alas, what can you do. People fall for it anyways.

In terms of an actual wash, I DID enjoy this. I’ve used quite a few salicylic acid washes, and this one was different. First off, the actual wash is almost metallic looking. It’s a white cream that has a metallic shine to it. I personally thought that was really cool. It didn’t really have a strong odor either. It was just right. I’m a sucker for aesthetics.

In terms of washing abilities, it’s quite potent for salicylic acid. Then again, I have skin that resembles a rhino, so that could explain it too. It made my skin more tight and smooth, which I enjoyed. I did notice less acne as well.

However, my main concern was that the label said ‘only meant for face and neck use’, and I used it for my body acne. That concerned me, although after a while I noticed it was no big deal. It worked pretty well and I did notice a small improvement after all.

Overall, if you have some mild acne, have some money to blow and want a decent wash, I’d say go for it. For the price, I’d say its worth it. It’s stronger than most salicylic washes and does a decent job of keeping your skin clean. Don’t fall for the clear skin fairy tale, that takes a bit more work than a simple wash. If you have very sensitive skin, I’d think twice, but salicylic acid is sensitive in general when compared to benzoyl peroxide and the latter. It’s up to you. 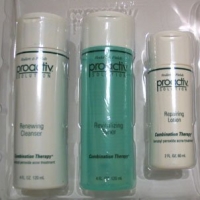 Even though it didn’t work and made my acne worse I must admit i’m glad I tried it. Now I know it doesn’t work for me, and can move on to other cheaper options. I guess it works for some people, but reading other reviews  really makes me wonder how they can claim to be so successful. After iIstopped using this product, my skin also became oilier. do not reccomend twice a day use. do not use if you have even slightly sensitive skin. But that’s not the biggest problem.

Be very wary of starting to do business with these people. Stopping is almost impossible. Here’s why:

We ordered this for my son, and he used it for almost two years. The results were modest but positive. Then his dermatologist chose a more active and different course of treatment, and told him to stop using Proactive.

We stopped being charged only because the credit card expiration date passed. But the shipments continued for another month. Then the threats started.

Proactive (Guthy Renker, the company that sells everything imaginable via infomercials) started sending us collection letters. Since we had called them three times to cancel, and since we had paid for all but the final shipment, I ignored them. The letters stopped.

Then we started getting incredibly aggressive letters and automated, mystery telephone calls at all hours from their collection agency, SKO Brenner American (800 669-5208)insisting that we owed for the final shipment. I explained the situation and they didn’t care to listen. Finally, in complete frustration, I paid for the final shipment just to make the calls stop.

This is not a customer-oriented company. Guthy-Renker isn’t trustworthy in the least. Interestingly, on their website, they have “ten commandments for management.” Not one of those says anything about dealing with customers honestly or fairly. They do talk about dominating their marketplace and trade associations, and they talk about building their brand and their upside at all times. But no where do they mention providing real value for their customers in an honorable fashion. From my experience they are living by their own ten commandments.

Spending more money ($10 for clearasil isn’t much) is the right direction to go in, but Proactiv is not the product you want to buy. I’ve had much better results after I switched to AcneNoMore, which offer a similar price range but a MUCH better product. Thanks to their acne care I’ve been zit free for a solid 3 months now. If you’re looking for a real solution to clear skin, look no further. Their product is normally expensive BUT I’ve got a deal package (i emailed them thanking them for their product and they hooked me up with this link) So now I’m going to share it with all of you.

Good luck everyone. I hope your skin problems get solved as mine did.